How to do UDP load balancing in Kubernetes.

Recently I to migrated a server application to Kubernetes whose interface was based on the Radius protocoll . The deployment looked quiet simple: A Pod with a service: 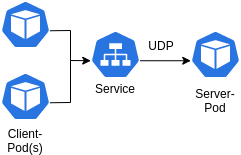 After doing some research I discovered that UDP based load balancing of internal services does not work as I expected so I started looking for an alternative solution.

Nginx as an alternative

Nginx offers UDP load balancing support in its non-commercial edition which is easy to set up . There are two drawbacks though:

You can use a headless Service to interface with other service discovery mechanisms, without being tied to Kubernetes’ implementation. You can create what are termed “headless” Services, by explicitly specifying “None” for the cluster IP (.spec.clusterIP).

The new topology puts the nginx and the headless service in between the clients and the server:

The deployment specification for the headless service in front of the server looks like this:

The service makes sure that endpoints are created for each new server replica and dns resolvable:

The commands above show that scaling up the server replicas by 1 creates a new endpoint that is resolvable inside the nginx container.

The nginx configuration for udp load balancing is only a few lines long:

the resolver directive tells nginx to resolve ip addresses for the servers from the dns server dns-server which points to the kubernetes internal dns server. The upstream directive has only one server entry that contains the dns name of the kubernetes service: udp-server-service-headless.
Using this configuration nginx will lookup all ip addresses for the fqdn udp-server-service-headless and load balance between them.

BUT the non-commercial version only resolves these names at startup. Whereas the commercial edition can be configured do this periodically . The server directive would just need the additional parameter resolve:

So in order to get new replicas using the non-commercial edition I had to employ a little trick described below.

When nginx is running it can be told to reload the configuration with the command /usr/local/sbin/nginx -s reload. So the solution in this case was to start a second process that would periodically executes that command.
So I created a simple script which does just that:

Using this nginx in a deployment with a single replica and a service in front does the load balancing correctly: